On this page I present several photos, where you will see some of my repairs made, which, by their nature, were pretty demanding. 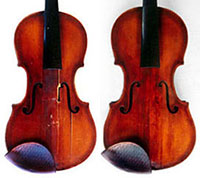 Each, even smallest intervention on an instrument, represents a very delicate approach both to the problem itself and its solution, all the more so because of the final result which becomes displayed to the public in two ways: by the sound and visually! Together, it shows the style and the mode of work of the maker, who becomes known either as the worth attention or the one who is not. 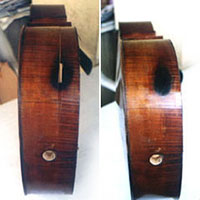 This means, that the accuracy and the precision in work with various cracks, breakages, crackings and similar deformations on the instrument, bring the one who did repair in the situation that for his work and knowledge he invested in certain repairs, he obtains commendations and critics of the people who are very essential for his work, sometimes even cruical! 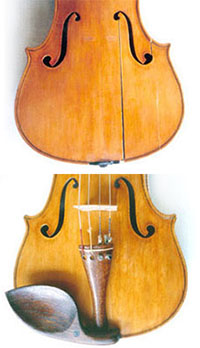 What I wish to say is, that the work which requires certain perfection, does not accept superficiality, carelessness, the lack of precision and faults of any kind, because every fault in this work brings about the alienation between the master and musician, that is, it becomes fatal for the master himself, who then suffers bad reputation.