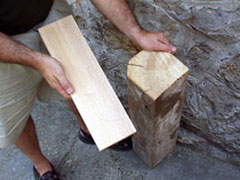 Nowadays, violine and its relative instruments are being constructed in the same way as it had been done some 300 years ago, following in the traditional footsteps of old Italian craftsmen such as Stradivari, Guarneri, Amati, Goffriller, Guadagnini etc. They have left an indelible trail in the history of construction of the stringed instruments, as well as in the history of music which probably would not be of the same quality if violine in the musicians' hands did not get the appropriate shape and the sound.

Due to this fact, today we are facing a great challenge and have plenty of space to try to present violine and its relative instruments in some new dimension, since we have no other choice. After all, even the old violines were also new once, isn't it so? 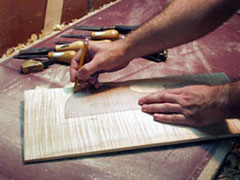 For the start, I would suggest any visitor of this site to try to experience a new instrument as something which deserves a special attention, and in return, I will make an effort to explain why. 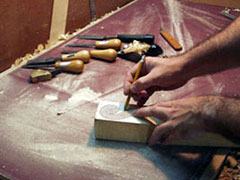 As a constructor of violines, violas and cellos, through many years of an active working exoerience I have been trying to reach some maximum, especially when tone and resonance are concerned. Facing a great challenge put in front of me, and led by an ideal example of old Italian craftsmen, I have started a batle with a very uncertain ending, where the work result is obvious immediately after the instrument is finished. Each trace of uncertainty has vanished after I heard the first sounds that came out of my first instrument. At that point, I realized there was nothing to be afraid of in the future and that I could solely dedicate myself to this extraordinary creative work. That was some fifteen years ago, and today my instruments still sound very well and have not lost any of its original quality. I have told you this whole story just to dispel doubt about the new instruments, where they are characterized as uncertain, unsure and worthless in comparison to the old instruments. It is not that there are not such instruments among the new ones - I am just making a point that there are many similar instruments among the old ones. Therefore, the only thing that matters is that there are good and bad instruments, and how old they are, is not a matter of concern. The main, and perhaps the insurmountable difference between the old and the new instruments, is that soft coating in the tone which posses only a few hundred years old instruments. However, it is more a biological-chemical wood maturing process and the process of its calcification which influences certain increase in the wood hardness, and that consequently brings about specific tingling, but still warm and pure tone. 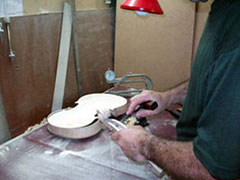 However, it is not that everything is lost for the new instruments in the very beginning, since the exactly same process of maturing takes place in the new instruments, as well. That means that by daily usage over a long period of time, a new instrument matures and gaines that specific and characteristic tone, one unique atribute, which no other instrument posesses in the same way. After all, isn't it so that Paganini was playing at that time the new violine 'Il Cannone' made by great del Gesu, which was famous as being unsurpassable when its brilliant and amazing tone was concerned. Just immagine if Paganini had said that he does not want to play that violine because it is new. That would not be clever, and certainly not useful either. Personally, I think if the instrument does not sound well when it is new, there is no chance it will sound better as it grows older. The older and more experienced I become, the more I realize it is true. 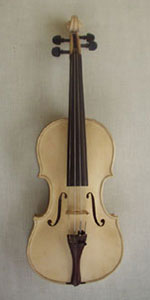 Finally, I would like to say something about my own instruments, as well! Concerning the fact that my long work experience with stringed instruments has had a significant role in my creative work, everything that I have done up to this moment represents one synthesis of knowledge, talent, work and enormous amount of love, which is present in each of my instrument! I keep a constant or time to time touch with all those who posess my instruments, for the sake of their regular maintainance, as well as for the purpose of following my instruments' development! Those who would like to posess one of my instruments can contact me, write down the sort and the type of instrument they would like, and I will be glad to answer in the shortest period of time, saying if and when the realization of the instrument is possible!

In any case, I am always eager to make a reasonable agreement with anyone who is serious in one's desire to have one of my instruments, in such a way that our agreement becomes a mutual pleasure.